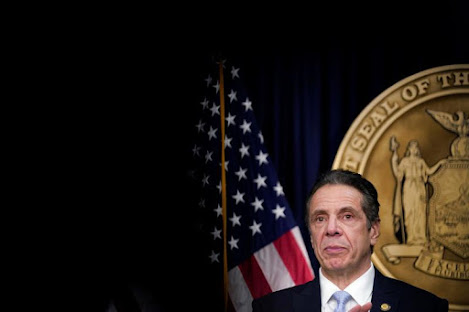 ALBANY – An employee in New York Gov. Andrew Cuomo's office claims the Democratic governor ogled her and made suggestive comments to her and other staff members, becoming the latest of more than a half dozen women to accuse the governor of inappropriate behavior.

Alyssa McGrath, an executive assistant, detailed her claims in an article published Friday by The New York Times, telling the newspaper the governor would remark on her looks, comment about her marital status, and once stared down her shirt and commented about a necklace.

“He has a way of making you feel very comfortable around him, almost like you’re his friend,” McGrath said. “But then you walk away from the encounter or conversation, in your head going, ‘I can’t believe I just had that interaction with the governor of New York.’”

McGrath, 33, told the Times that Cuomo was well-known to play favorites among women employees. When she started in 2018, she said Cuomo made a comment about her appearance in Italian.

Not long after, she said Cuomo stared down her shirt during a dictation session in his office.

“I put my head down waiting for him to start speaking, and he didn’t start speaking,” she said, according to the Times. “So I looked up to see what was going on. And he was blatantly looking down my shirt.”

McGrath also told the paper another employee of Cuomo's office told her in detail about an alleged groping incident at the Executive Mansion, which was detailed by the Times Union of Albany last week.

The employee, whose name has not been made public, accused the governor of summoning her to his residence to assist with a technical issue involving his phone. While there, the woman claims Cuomo reached under her shirt and groped her.

Cuomo has acknowledged making jokes and comments that he claims may have been "misinterpreted" as "unwanted flirtations."

Glavin told the Times that Cuomo has greeted men and women with kisses on the cheek and uses Italian phrases like "ciao bella," according to the paper.

“None of this is remarkable, although it may be old-fashioned," Glavin said. "He has made clear that he has never made inappropriate advances or inappropriately touched anyone.”

Cuomo has steadfastly refused calls for his resignation, which have come from most of the state's congressional delegation, both of its U.S. senators (including Majority Leader Chuck Schumer) and state Senate Majority Leader Andrea Stewart-Cousins, D-Yonkers.

His conduct is the subject of at least three investigations, including an ongoing sexual-harassment probe overseen by state Attorney General Letitia James.

The U.S. Attorney's Office and FBI in Brooklyn are investigating the Cuomo administration's handling of COVID-19 data related to nursing homes, and the state Assembly has launched what it is calling an "impeachment investigation" into multiple issues.